Spread the love
Einstein’s Theory Of Relativity is one of the most beautiful pieces of scientific work in history, but the question is that, does it explain the things we see in our daily lives?


Proposed by Albert Einstein in 1905, he came with a  brilliant idea that, ” Laws Of Physics Is Same Everywhere“. Einstein’s Relativistic Theory is one of the most successful theories of the physical world that ever came up to reality. Actually, the theory of relativity is quite simple and easy to understand.


Einstein’s Relativistic Theory is a combination of the relationship between the Physical Observations and the concept of the Space-Time Continuum. As Einstein states, “Time is not constant, an object in motion experience time slower than an object at rest”.


Einstein’s Theory Of Relativity caused a paradigm shift in the field of Physics and shook the whole world by altering the way everyone thinks of Space and Time. In fact, there are several examples of Einstein’s Relativistic World that we can see in our daily lives, even some of the technologies we use today to demonstrate that Einstein was right.

4 Ways You Can Look Into Einstein’s Relativistic World 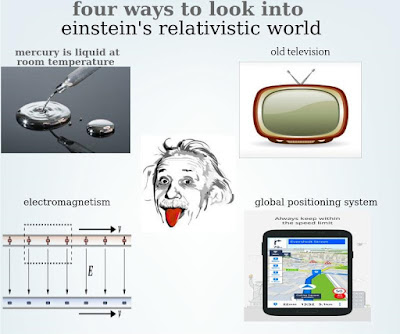 
For your GPS navigation system to function precisely as it does, Satellites have to take Relativistic Effects into account. GPS is a Global Navigation Satellite System that basically provides Geolocation And Time Information to a GPS receiver anywhere on Earth.

So, whenever you are trying to plan a route via GPS from your “Current Location”, your Smartphone needs to connect to a satellite to puzzle out where “Your Current Location” is. Satellites are moving around the Earth at speed greater than normal (roughly 6000 miles per hour). The satellite speed might sound fast enough, but It Still Only About A Thousandth The Speed of Light. Even at a much slower speed than Speed Of Light, satellites still confront with Time Dilation.


The satellite encounters the voyage of time faster than people on Earth, so Einstein’s Relativistic World comes into play when figuring out where on Earth you are.
∗ GPS system is available for Military Civil as well as Commercial purposes around the world.

If you ever enjoyed watching Television in the 1990s then you can thank Albert Einstein for that. Without the use of Einstein’s Relativistic Theory, it would be impossible to fabricate your very favorite OLD TV’S. However, Einstein’s Relativistic Principle doesn’t apply to LCD, LED, or PLASMA TV’S because these devices don’t depend on ELECTRON BEAMS.


Our OLD CLASSICAL TV’S might be dying out, however, equipment’s used inside them are still common in use today. Our OLD TV’S were equipped with an instrument called Cathode Ray Tube. A Cathode Ray Tube works by accelerating electrons and fires them behind the phosphor surface with a Big Magnet which has a coating of phosphor that gives out the light when hit by electrons.

These electrons are roughly moving up to the speed of 35 percent of The Speed Of Light. As a result, Relativistic Effects are perceivable. So, when the manufacturer configures the magnets, they had to take relativistic effects into account.
∗ Our Television Would Be Blurry Without Relativistic Effects

From all the known metals in the Periodic Table, each and every metal is present in a solid state at room temperature except for one and that is MERCURY.


Why Is Mercury Liquid At Room Temperature?

The answer is quite simple. Any guesses. Yeah, you are right. It is because of the Relativistic Effect. Mercury – The Only Metal With This Exceptional Property has baffled as well as fascinated men for centuries.


Mercury: a substance that can aid health when calibrated inside a thermometer and on the other hand, it can kill when it is accumulated in living tissues. Mercury is a heavy atom with an atomic number 80 with an electron held closely to the nucleus because of their speed and effective mass increase.
According to Einstein’s Relativistic Theory, the apparent mass of an object increases when its velocity approaches the speed of light.


In the case of Mercury, the speed of the electron approaches about 50 percent of The Speed Of Light and due to Relativistic Effects, apparent mass increases approx 1.3 times to its rest mass. This mass increase results in approx 25 percent decrease in Mercury’s orbital radius. As a result, Mercury melts at a lower temperature and is typically liquid at room temperature.


∗ Not only Einstein’s Relativistic Theory Explains The Liquid Nature Of Mercury But Also Explains Why Gold Is Yellow And Silver Is White In Color.

I hope almost everyone is familiar with Electromagnets. Let me explain it in my way. When we combine Electricity and Magnets, we get Electromagnets. Yes, you are guessing it right. Electromagnets also work via Einstein’s Relativistic Effects.

See the idea is quite simple, ” if you take a piece of wire and make a loop of wire and then move that loop of wire through a magnetic field. wow !!!!! you just generated an electric current”


On the other hand, imagine particles in a loop of wire is moving along the wire, then it will automatically start feeling the effects of Length Contraction in the moving electrons. This explains that the change in the linear density creates the NET ELECTRIC FIELD which we recognize as MAGNETIC FILED.


These electrified metals have a mind-baffling property:

This Is An Electromagnet. You Can Thank Einstein’s Relativistic Theory That This Phenomenon Is Possible.


At last, I will leave you all my readers with a quote by ALBERT EINSTEIN regarding the Theory Of Relativity, and he quote


“WHEN YOU ARE COURTING A NICE GIRL AN HOUR SEEMS LIKE A SECOND. WHEN YOU SIT ON A RED-HOT CINDER A SECOND SEEMS LIKE AN HOUR. THAT’S RELATIVITY.”