Spread the love
At the end of the 19th Century, when the whole Scientific World was bending towards the Wave Theory of Christian Huygens for the explanation of every physical phenomenon as opposed to the Particle or Corpuscular Theory Of Issac Newton.

It was Albert Einstein who put forward the particle theory of the light i.e Photoelectric Effect (hypothesized By Max Planck) that later paved the way for the creation of the Quantum World.

In the early 20th Century, a phenomenon like Interference, Diffraction, Polarisation could only be demonstrated by assuming that Light Had A Wave Nature. But there were some other physical phenomena such as Blackbody Radiation, Photoelectric Effect, Hydrogen Spectrum, Compton Scattering that could not be understood. The problems within Classical Physics led to the development of Quantum Theory. 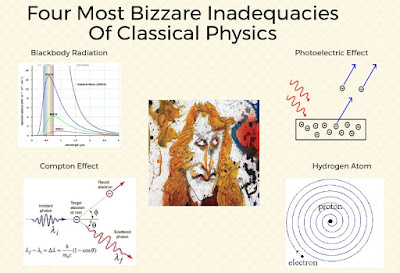 Any object or a material having a temperature above absolute zero emits light at all wavelengths. If an object (whether an iron horseshoe, a piece of charcoal, or ceramic vase – all will emit the same blackbody spectrum if their temperature is the same ) is perfectly black and do not reflect any light, then the light that comes from an object or material is called as blackbody radiation. The term Blackbody Radiation was coined by Gustav Kirchhoff in 1860. Blackbody Radiation is also called Cavity Radiation, Complete Radiation, or Thermal Radiation.

According to the classical theory, it predicts that “a hot body should radiate an infinite amount of energy directly contradicting the experimental evidence shown by some physicists as well as violating the principle of conservation of energy“.

The electrons in the hot object can vibrate with a different range of frequencies, from very few vibrations per second to a huge number of vibrations per second. Classical Physics predicts that each frequency of vibration should have the same amount of energy directly contradicting and indicating that a new model for the explanation of the blackbody spectrum was in need to be discovered.


When the whole scientific world was puzzled by the prediction of Classical Physics for the blackbody spectrum directly contradicting the experimental evidence. It was Max Planck who solved this problem. According to the Classical hypothesis that each frequency of vibration should have the same amount of energy must be somewhere WRONG!

In 1900, Planck suggested that each wave has a natural energy that is totally independent of the temperature of a hot body. Energy is not distributed equally by electrons that vibrate at different frequencies.

Planck made some strange assumptions that ” electromagnetic radiation can only be emitted or absorbed in discrete packets known as quanta.” The size of the quanta depends on the frequency of vibrations. He gave the following equation to determine the energy of the wave
i.e

Max Planck said that an electron vibrating with a frequency f could have an energy of 1hf, 2hf, 3hf, so on, making the above equations as

THAT IS WHY THE BLACKBODY SPECTRUM ALWAYS BECOMES SMALL ON THE LEFT-HAND (HIGH FREQUENCY) SIDE.

When a light ray falls on the Metallic Surface, electrons in the metallic substance absorb the energy of light and as a result, electrons get emitted from the metallic surface. This process is known as PHOTOELECTRIC EFFECT. Emitted electrons are known as Photoelectrons. It was discovered by Heinrich Hertz in 1887 and later confirmed by Philipp Lenard in 1900.

Nowadays photoelectric effect is used to produce the electric current that runs many solar-powered devices.

According to Classical Electromagnetic Theory or Wave Theory, light is a wave having energy distributed throughout the wave. Basically, classical physics made two hypotheses about the photoelectric effect;

1) A little adjustment in the intensity of light will change the kinetic energy of electrons emitted from the metal surface.
2) A sufficiently dim light will take some time for enough light energy to raise up and eject an electron from the metallic surface.

However, both of the above hypothesis was WRONG!

The experimental results did not match the two predictions made by Classical physics. It would make no difference how dim the light is. There would never be a time delay. The measurements were quite easy for Einstein to explain if the light is made up of particles (photons) instead of waves.

In 1905, Albert Einstein polished and extended the hypothesis made by Max Planck used to explain the blackbody spectrum that light must consist of clumps or quanta of energy later called photons. He assumed that each quantum of light possesses the energy hf (Planck’s constant times the frequency of the light).

The absorption of a single photon by an electron increases the energy of electrons by hf. Some part of this energy is used to eject the photoelectrons from the metal surface. This is called the Work Function. And the remaining energy is transferred to the electrons to increase their kinetic energy.

Therefore the energy of light is not evenly distributed along with the wave but is concentrated in the photons.

According to Einstein, a dimmer light means fewer photons, but simply turning down the light (without changing its frequency) does not alter the energy of an individual photon. So for a specific frequency light, if a single photon has enough energy to eject an electron from a metallic surface, then electrons will always be ejected immediately after the light is turned on and the photons hit the metal.

Einstein won his Nobel prize for showing that if a light is considered as a particle instead of a wave, whose energy is proportional to the associated frequency, then the photoelectric effect is fully explained.

Compton Effect or Compton Scattering discovered by Arthur Holly Compton in 1923, is an Inelastic Scattering of a photon by a charged particle (mostly an electron).

When the high-energy photon collides with the target in which electrons are loosely bonded to the nucleus, therefore, can be treated as free. As a result, the scattered radiation is found to have smaller radiation than the incident radiation. This is known as the Compton Effect or Compton Scattering.

According to the classical view of Compton scattering or Classical Wave Theory, Electromagnetic Radiation scattered by charged particles cannot explain any type of shift in wavelength or frequency. Compton’s effect demonstrated that light cannot be explained purely as a wave phenomenon. In simple terms, the Compton Effect shows the particle nature of light

Although, it was Max Planck and Albert Einstein who hypothesized that light could behave as both a wave or particle. But, it was Arthur Compton who proved that this was possible.

According to the Classical Theory or Rutherford Model of an atom, an atom consists of a dense, heavy, and positively charged nucleus encircled by negatively charged particles (electrons) that would counterbalance the charge of an atom.
Since the election is accelerating, the classical theory proposed that accelerating electrons will continuously radiate electromagnetic radiation, therefore, as a result, the radius of an atom will shrink with time, and finally, electrons will spiral into the nucleus.
In simple words, atoms should not survive longer than 10-12 seconds.

This clearly did not happen. Therefore, the prediction of classical theory came to be WRONG!


Neil Bohr used Ernest Rutherford’s Model Of An Atom and the theory of quantum physics for describing the behavior of a model (Bohr’s Atomic Model) that was accepted for the better part of the 20th century.

Bohr postulated his theory much like Rutherford but placed charged particles (electrons) in layers of orbit and with each orbit having specific energy such that, electrons can jump from a higher orbit to the lower orbit, and when their energy decreases they return to their orbit.


In simple words, electrons have more energy when there are in larger orbits.


Bohr’s model’s key success was the explanation of the Rydberg formula for the spectral emission lines of the hydrogen atom. The quantization of atoms also contradicted the predictions made by classical theory.

At last, I will leave you all my readers with a quote by Neil Bohr  regarding Quantum Mechanics, and he quote

“IF QUANTUM MECHANICS HASN’T PROFOUNDLY SHOCKED YOU, YOU HAVEN’T UNDERSTOOD IT YET. EVERYTHING WE CALL REAL IS MADE OF THINGS THAT  CAN NOT BE REGARDED AS REAL”

2 thoughts on “Four Most Bizarre Inadequacies of Classical Mechanics”