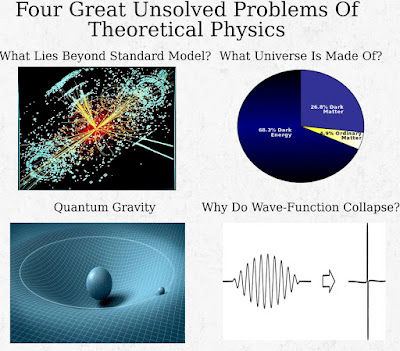 Whenever any physicist predicts that this is the end of physics, suddenly a new theory pops out in physics defining a new way to understand the mechanism or a process that how actually nature works.


Physics can be bifurcated into two groups i.e

1. Experimental Physics: a way to understand the nature of the working universe by simply demonstrating or making a prototype of a phenomenon to be explained.

2. Theoretical Physics: a way to understand the nature of the working universe by theoretically explaining just using hypothesis and maths to explain physical phenomena.

✱ let’s take an example of a world-famous scientist: great Albert Einstein.
Albert Einstein is majorly famous for his theoretical works regarding Einstein’s Theory Of Relativity. Yet he got his Nobel prize in physics for his explanation of photoelectric effect not for the theory of relativity. This is probably because the photoelectric effect is experimentally proved. on the other hand, the relativistic theory is just a theoretical concept that is why he did not win a Nobel prize in physics for his extraordinary work in the field of relativistic theory.

Combining the Quantum Theory with General Relativity is the far hottest topic to be ever discussed by any physicist association throughout the sphere. Physicists do even name the theory (if in the coming future theory is completed) to be called as Quantum Field Theory or Quantum Gravity.

If someday Gravitons are actually been detected then and only then the question related to the space-time curvature at the sub-atomic level could be explained.

2. What Lies Beyond The Standard Model?

As nowadays physicists refer that the Standard Model Of Particle Physics is the most successful theory that has ever been formulated. Well after the discovery of Higgs boson experimentally in 2012 (though it was hypothesized in the early 1960s) solidified the long-standing prediction of its existence. Still, the standard model of particle physics isn’t able to explain everything; forcing the physicist to ask a question that, “what lies beyond the standard model?“.

Physics Beyond The Standard Model is a theoretical model which is necessary to explain the inadequacy of the standard model such that its inability to explain the origin of mass, matter-antimatter asymmetry, the inconsistency of standard model with Einstein’s general relativity, space-time singularity issues such as Black Hole or Big Bang, the origin of String Theory or M-theory, etc.

However, the standard model is quite successful for the explanation of Higgs boson, W and Z boson or Quarks. It is really baffling for the physicists to perceive what lies beyond the standard model because the human mind eludes for more.

As the quantum mechanical law states that each and every fundamental particle (electron-proton-neutron) don’t behave like tiny balls, but sort of like waves that are spread over a large space. Each particle is represented by their Wave-Function or Probability Distribution, which tells us that where a particle is or what’s the velocity of the particle etc.


The thing is when we experimentally try to measure a particle’s velocity or position, which apparently causes the wave function to collapse into a definite state. Now the question arises that what causes the wavefunction to collapse? why does measuring a particle’s position or momentum significantly lead to wavefunction collapse? how does the quantum description of reality give rise to the reality we perceive?

4. what universe is made of?

In my opinion, even we are at the pinnacle of understanding physics that is we know everything about this universe, or else we are at the bottom of understanding physics that means we know nothing about this universe. The universe still has a number of mysteries to be found (maybe not today but surely in the coming future do). What universe is made of is still baffling the physicists around the world?

Well here we go again, according to the so-called theoretical hypothesis, the universe is made of

In the simple language of cosmology, cosmologist around the globe suggests that even though gravitational force or interaction is pulling the fabric of space-time inward (due to the presence of ordinary matter) yet the “fabric” of cosmos is expanding at the ever greater speed (due to the presence of dark energy). The story is not over yet. The dark matter which constitutes 84.5 percent of the total mass (Since dark energy, by convention, does not count as “matter”. therefore. this is 26.8/(4.9 + 26.8)=0.845) is behaving as a glue which is technically binding the galaxies and clusters of galaxies together.

Over the past 80 to 90 years it has been cleared that the fundamental remainder (excluding ordinary matter) is comprised of two undefined entities — Dark Matter and Dark Energy. Till today the hypothesis or theoretical prediction of dark matter and energy has not been identified. But maybe in a considerable future, we will.